China issues stern warning to US: ‘Don’t sail in our waters’ 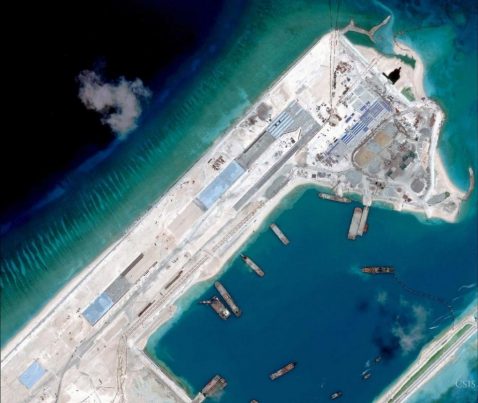 (NationalSecurity.news) An editorial in state-run Chinese media has warned the United States against continuing “ceaseless provocations” and to stay away from its manmade islands in the South China Sea.

As NationalSecurity.news has reported, the Pentagon has been planning to send U.S. warships into the 12-nautical-mile territorial limit that China is claiming for its manmade island chain in the vicinity of the hotly contested Spratly Islands.

But, an editorial in the Global Times, a media source close to the communist Chinese government, has condemned U.S. “coercion,” and added, “China mustn’t tolerate rampant US violations of China’s adjacent waters and the skies over these expanding islands.”

The editorial also noted that the Chinese military should “be ready to launch countermeasures according to Washington’s level of provocation.”

Exactly when the Obama administration planned to order U.S. warships into the claimed Exclusion Zone is not known, however, reports have said the Pentagon has been planning the incursion since May.

“Tensions have mounted since China transformed reefs in the area – also claimed by several neighbouring countries – into small islands capable of supporting military facilities, a move the US says threatens freedom of navigation,” The Guardian reported.

In recent days, following a meeting with Australian officials, U.S. Defense Secretary Ash Carter said the United States would continue to send the Navy into waters allowable under international law, including the South China Sea.

His remarks were echoed by Australian Foreign Minister Julie Bishop, who said both nations are “on the same page.”

Have you visited our online store? Click here for the NationalSecurity.news Commissary online!

Pentagon officials have said it is necessary to challenge China’s claims, because to not do so would only invite further expansionist aggression from Beijing. Also, inaction tacitly implies that China’s extra-territorial claims are legitimate.

Nevertheless, the Global Times editorial warned that the U.S. move could be “a breach of China’s bottom line.”

“If the US encroaches on China’s core interests, the Chinese military will stand up and use force to stop it,” the editorial claimed.

The editorial was published after China’s foreign ministry spokeswoman, Hua Chunying, said “certain countries have been flexing military muscles in the South China Sea over recent period of times.”

Government-aligned press in China often serve as organs for official policy, though it wasn’t clear if leaders in Beijing were preparing to counter the U.S. move.

In addition to China, Brunei, Malaysia, the Philippines and Vietnam – all members of the Association of Southeast Asian Nations (ASEAN) – claim parts of the sea; Taiwan, which China regards as a breakaway province, is a sixth claimant.

“’Artificial island’ is an inaccurate depiction of China’s construction work in the South China Sea,” the editorial said. “China is expanding, not building these islands out of thin air. The expanding national interest in terms of waters and air space is not yet clearly defined by international law. Whether this ambiguity could trigger major-power conflicts depends on what major powers think.”

Under international law, nations can claim a 200-mile “Economic Exclusion Zone” off their coastlines. In Southeast Asia, those zones often overlap. But the Spratly Islands region where China is constructing its artificial reefs in the middle of the South China Sea is much closer to the coastlines of Vietnam, the Philippines, and Malaysia than to China. And in any case, the islands lay hundreds of miles away from any of these countries.

“If Washington wants to prove it can keep its military edge in China’s offshore areas, then let it come. US military forces will have a chance to test the deterrence of its equipment and its willingness to show off its hegemony on China’s doorstep at any cost,” it said.

“The South China Sea is not a place where countries can act wantonly. Rules should be jointly made by all stakeholders, and US military ships cannot dominate the region. Washington has over-estimated the effect of its military prowess.”